What does he do?

Jamel was born in Harlem, New York. His father was African American (from Holly Hill, South Carolina) and his mother is Italian, Puerto Rican, German and Irish. He did not learn of his mother’s true racial composition until he was 25 years old. He went to elementary school in the South Bronx, where he lived during the height of New York’s crack epidemic. His family was very poor and he rarely attended school. Because of this, a social worker attempted to take he and his two younger brothers into custody. his mother pushed the woman out of the apartment and he and his family escaped down a fire escape and left everything behind. The family became homeless and lived in shelters and welfare hotels as his they evaded capture by the police. While homeless, he joined Boy Scout Troop 103, which consisted at the time of only homeless kids from the Prince George Welfare Hotel. Years later, despite homelessness, group homes, truancy and a host of other challenges, he became an Eagle Scout and National Young American Award Winner. During this period, his mother fought with mental illness and as a result, he was eventually placed into a group home. Despite where he found himself at different points in childhood, he knew that those places were just situational, and kept trying to make things happen. 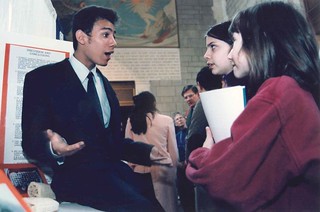 Jamel attended Martin Luther King High School in New York City. He conducted research in microbiology under the supervision of Dr. Edward J. Bottone. His research focused on Loofah Sponges and other exfoliative devices as reservoirs and vehicles in the transmission of potentially pathogenic bacterial species to the human skin.  He also focused on viable but nonculturable bacterial species that inhabited sponges.  He was a Westinghouse Science Talent Search (now Regeneron) Finalist and 10th Place winner. His accomplishments led to a front page article about him in the New York Times on Superbowl Sunday as well as countless other articles and television segments, including interviews with Tom Brokaw and Jane Pauley. A reader’s digest article about his life has been translated into over 70 languages over the course of two decades.

Jamel attended New York University on a full scholarship, where he studied Biology, Politics & Education. He was premed and prelaw. He was both a Samuel F.B. Morse Scholar and a University Scholar. He was the Sophomore Class Representative in the College of Art and Science and was an NAACP-NASA Superstar of Science.  He continued his research while at NYU, splitting his time between Mount Sinai and his own lab at  NYU, an empty, unused laboratory on campus which he was given permission to use by then head of the Biology Department and Dean of the faculty Philip Furmanski.

After his mother was sexually assaulted while he was at NYU, Jamel decided not to go to medical school and to write a book on DNA and litigation. After seeking advice from NYU President John Sexton, who was the Dean of NYU Law and his professor as a freshman, he applied to law school.

Jamel attended St. John’s University School of Law.  He did all sorts of things and accomplished a bunch. None of it is worth discussing. There is nothing cool about law school. However, St. John’s Law provided him with a great education.

The work of Jamel and his colleagues has led to publications in several peer-reviewed journals and has been cited in countless articles and references.  If you know that you must take special steps to clean a washcloth, loofah sponge or pumice stone, it is most likely because of the work that they did.

Pictured with Nobel Prize winner Dr. James Watson, who won discovered that DNA is a double Helix. Dr. Watson wrote the foreword to the DNA Book.

Pictured with characters from Birds, Bees, Babies by J.L. Sweat

Walter Scott: What happens when there is no video?

The Central Park Five: The Untold Story Behind One of New York City’s Most Infamous Crimes

Expert Witness in the Legal System: A Scientist’s Search for Justice

We Dream Together: Dominican Independence, Haiti, and the Fight for Caribbean Freedom

Guide to Information Sources in the Forensic Sciences

Tracing Technologies: Prisoners’ Views in the Era of CSI

Being Alive and Having to Die: The Spiritual Odyssey of Forrest Church

Feminism and the New Democracy: Resiting the Political

The gift of friendship